By WCS
Posted May 12, 2017
In WCS Blog
WCS Member of the Month: Kathryn Verna2017-05-122019-03-11https://www.womenincleantechsustainability.org/wp-content/uploads/2019/04/wcs-logo-2019-e1593134994992.pngWomen in Cleantech & Sustainabilityhttps://www.womenincleantechsustainability.org/wp-content/uploads/2018/03/wcsmay_1_orig-1.png200px200px
0
WCS Member of the Month highlights the amazing work of female leaders jn the cleantech and sustainability sector. This month, Kathryn Verna of GE Renewable Energy is in the spotlight.
​
WCS: What excites you most about the work you’re doing at GE Renewable Energy?Kathryn: For my first 6 years in GE’s Onshore Wind business, I was a Product Manager working to bring down the cost and increase the power output of utility-scale wind turbines. I’ve had the awesome experience of standing on top of a wind turbine nacelle 100m in the air (fully harnessed of course!). In 2015, GE formally announced its “Digital Wind Farm,” a holistic set of solutions created on a software platform that has been purpose-built to enable the “Industrial Internet of Things.” I jumped at the chance to join the team that is making it real for our customers around the world. What excites me is knowing that 2 years into this journey, we have barely scratched the surface of what is possible in terms of making renewable energy an easier choice around the world.

WCS: What professional accomplishment are you the most proud of?

Kathryn: When I look back over nearly 30 years, I am proud that I consistently chose to work on things that in some way improved the condition of the world, starting with airbags for small car models before they were standard equipment (and in case you follow these things, no, not for Takata), later on fuel-saving control software for freight locomotives, and now in promoting renewable energy of all type. Consistently being part of teams that find solutions to hard technical problems gives me tremendous hope for the ability of humans to solve the very problems we cause.

Kathryn: Is it ok to credit the recently elected POTUS? I felt compelled after the election to become more engaged in the causes that are important to me. At the top of that list are protecting the environment and increasing the ranks of women in non-traditional roles. WCS sits squarely at the intersection of the two.

WCS: What are your career ambitions?

Kathryn: To continue doing work that feels like a valuable use of my time.

WCS: What advice do you have for other women in WCS?

Kathryn: Pick your battles, but when you pick one, be persistent. If what you do to earn money happens to align with your calling, that’s awesome, but most of us aren’t that lucky, either because of practical considerations or simply being unable to identify a calling. That’s ok. What I would say is, apply whatever skills you have to something that, 20 years from now, will have mattered. Important work is being done by the biggest multi-national corporations and the smallest startups, in education, and at non-profits. So there is no shortage of opportunity. 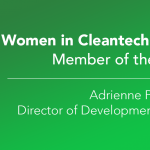 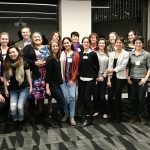