Every year since then, the booth babes have been fewer at solar conferences in North America, and the ogling crowds smaller — or nonexistent.

But this year’s Intersolar sported a few notable exceptions. Occasionally, a young woman in a Playboy bunny outfit would walk by, or I’d see a couple skimpy-dirndl-clad women taking a rest on a bench. What was going on?

The booth babes had enough of a presence to be called out on social media and in at least a couple articles, including my own and one by Kevin Christy.

The bunny outfits were the work of Talesun Solar, which responded to the outcry with a press release apology. In fairness to Talesun, they weren’t the only solar company with booth babes at this year’s show. And they didn’t invent the concept.

But their press release points to a serious lack of understanding of the criticism. Their goal is clearly to defend their business, not to address the issue.

Talesun’s business is well worth defending. As they point out in their press release, “Talesun Solar is a leading company that contributes on a large scale to developing a more sustainable environment, with around 2.8 GW of annual capacity solar module both in China and Thailand. Talesun is acting positively on the society, people, and on our planet. We are very much respected by our peers and recently we just donated 20 kW of solar modules to Buddhist Temples in Thailand.”

This is all highly commendable. No one doubts the fine work that Talesun is doing to protect our world. The same can likely be said of other solar companies who use booth babes.

And that is, in fact, part of the point. Booth babes should be a thing of the past in any industry, and especially in ours. We’re a forward-looking industry that’s all about sustainability and making the world a better place — not just in the Silicon Valley sense, but in a very real way. Shouldn’t that include respecting women?

In Talesun’s press release, Marketing Team Manager Helen Wang said, “Having attractive [read, scantily clad] booth girls for our booth in the solar energy industry is considered something normal, just look at the exhibition in Bangkok a few months ago, many major companies, were also hiring attractive booth girls.”

We need a new normal. It should not be considered normal to demean women. As Christy pointed out, the practice is both outdated and ineffective (see his article for details):

Instead of engaging in a practice because it’s “normal,” let’s think about what’s normal and whether those norms are due for a change.

What does it mean to be open-minded?

Perhaps America has been sending the wrong message to the world with the images we project in our advertising and media. Being okay with seeing some flesh is not the same as being okay with using women’s bodies to sell products in a professional environment. (I don’t like that use in any environment, including ads, but it’s even more inappropriate in the professional world.)

Wang showed a lack of understanding of this concept when she said in the press release, “We thought it wouldn’t be a problem here in North America since we considered it was even more open minded than Asia.”

The dictionary definition of open-minded is “willing to consider new ideas; unprejudiced.” Open-minded does not mean accepting a treatment of women that’s outdated, demeaning, and disrespectful. Let’s instead consider new ideas, like this shocking one: use knowledgeable salespeople to sell your products.

It’s not about any one solar company

My intention is not to focus on Talesun or any other solar company. But I felt I needed to respond to their press release because we can’t fix this problem while such a lack of understanding of it remains.

The booth babe issue is a systemic one, and really just the iceberg tip of a much larger issue. This is one iceberg we need to melt.

The solar industry is due for some changes. We need to welcome more women into solar; doing so will be good for everyone. Companies with greater diversity, and with women in leadership roles, have been shown to outperform those that lack diversity. Plus, women are major solar consumers, as a survey conducted by Identity3 found. So having more women in solar could help us more effectively reach those customers.

Most of the time, I’m not confronted with the issue of women in solar. That’s because the leaders of my company, MyDomino, have made it a non-issue. I’m thankful that these men not only employ women but make us a large portion of their management team, treat us equally, listen to us. So in my day-to-day work life, I don’t have to think about it.

But many others do. And we’re all reminded of it when we attend any large solar event. Yes, things have gotten somewhat better at solar conferences. Yes, we’re seeing fewer booth babes. Yes, the percentage of women in solar has gone up from 18 to 21%.

But there’s still work to be done.

Moving toward a solution

We all have much more important work to do. As Talesun’s William Sheng said, “I hope that next time, the media could write about how much we do for the environment.”
So let’s work together to make a change. That change can begin at home:

These are all big endeavors, and they’ll take time. Meanwhile, doing away with booth babes, while a simple action, will send a powerful message. It’s time the for the solar industry to make that statement.

Rosana Francescato is Director of Communications at MyDomino, an energy concierge service that’s helping Americans switch to clean energy and save money. She’s on the boards of Women in Cleantech and Sustainability and Everybody Solar. And she’s been the top individual fundraiser at the GRID Alternatives Bay Area Solarthon six years in a row.
Recent Posts 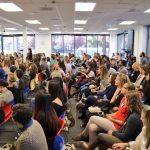 Inspiring a Movement of Women, One Talk At a TimeWCS Blog