May 2021 Member of the Month: Catherine McLean

How did you hear about WCS and what prompted you to join?

I was introduced to Abigail Carson as someone who is a serial networker, like myself, and she told me about WCS. This was just as the pandemic started and I was invited to join as a virtual member. It has been so great. I was really impressed with the different content, the mentoring, the jobs board, the kind of speed networking.

You founded a recruitment firm – Dylan Green – that has branded itself as a placement agency for cleantech companies with an emphasis on helping firms meet their diversity, equity and inclusion goals. Let’s hear more about this and why the name Dylan Green?

Well, Dylan is the name of my son and green for renewable energy. This is the third agency that I have set up. I decided to launch it when I was on maternity leave two years ago. We focus on North American companies that have between 50 and 200 employees.

The timing was right with everything going on like BLM and such. I’ve been overwhelmed by how much employers have wanted to get involved and work with me to try to diversify their candidate pools. Ultimately that’s what I’m trying to do. I’m not saying you HAVE to hire a person of color candidate. I’m just saying let’s get you a diverse applicant pool from which to choose the best candidate.

Some of my frustration is that there is so much sudden need for underrepresented candidates that the messaging comes across as excluding white males. That’s not what this is about. Exclusion is not the answer to inclusion. I just want to provide a rainbow of profiles.

Please share an anecdote that you’re particularly proud of resulting from Dylan Green.

I did a placement last year where the employer asked for a diverse pool of candidates in solar. He wanted a like-for-like candidate, someone already working in the solar industry. I suggested that he open up the field more broadly to the energy sector including oil and gas. He agreed and he wound up hiring a person of color candidate from Halliburton. Since then, the employer has been over the moon, giving me feedback that the new employee is absolutely fantastic and has brought in processes and procedures benefitting the solar company. This was so rewarding because it means that if I can get someone so entrenched in oil and gas to not only transition into but excel in clean energy, then there is so much hope for the future!

Given your birds-eye view, do you have any theories/advice on how women and traditionally underrepresented folks can gain more traction in the cleantech space with regard to jobs, entrepreneurship and board roles?

There are a few things, but the first I would say is networking. The Wall Street Journal just featured an interesting article talking about how networking is back. If you look at some of the data about why white males are so successful at getting jobs that other people might not be aware of, it’s because of their network. As women, it’s very important we adopt the same principles that they do – the golf course, if you like. We have to embrace networking and sharing openings that may never make it to a job board. A lot of roles I work on will never be advertised. The only way a woman is going to excel in her career – it’s not trawling on a job board. Really, it’s investing the time in growing one’s network. Not only asking for things from others but volunteering things from yourself. I find that the more I give, the more I receive. It’s that principle that networking is not just taking, but giving as well.

The second point I will make is that don’t assume people know what you want. If it’s not explicitly stated in your LinkedIn profile or otherwise about what you are passionate about and what direction you want to take, be sure to be very clear about that.

Do you have any tips, mentors, books or coaching that have helped you in your career that you would recommend?

Gary Vaynerchuk – I identify with him; he’s an Eastern European immigrant who came to New York and built a business. You know, it’s the hustle that comes from the mentality of coming here and setting up a better life. His message is about brand and content. You have to give away content for free and not necessarily expect anything in return. This was a big aha moment for me. I have a LinkedIn presence that I wasn’t capitalizing on until I realized there’s an audience there that I could speak to. Then I started to focus on video content, and providing high-quality video interviews.  What he recommended has really stuck with me. All that he has to say about optimism and not expecting anything from anybody is inspiring. I’ve interviewed some pretty high-profile executives in energy and my next focus is on interviewing people from Native American communities. Don’t hesitate to have a look at my interviews or get in touch with me directly.

Interview conducted by Jeanne Trombly, an Oakland, CA-based Writer in Residence for Women in Cleantech & Sustainability.

Do you want to connect with professionals from across the cleantech, energy, and sustainability industries? Join us as a Virtual Member today! Sign up here. 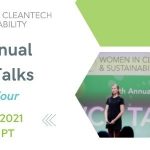 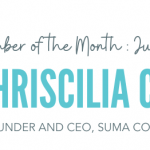 “Being part of a community means being a part of something greater than you. It’s about sharing, growing and opening up to who you are and what you believe in.”WCS Blog